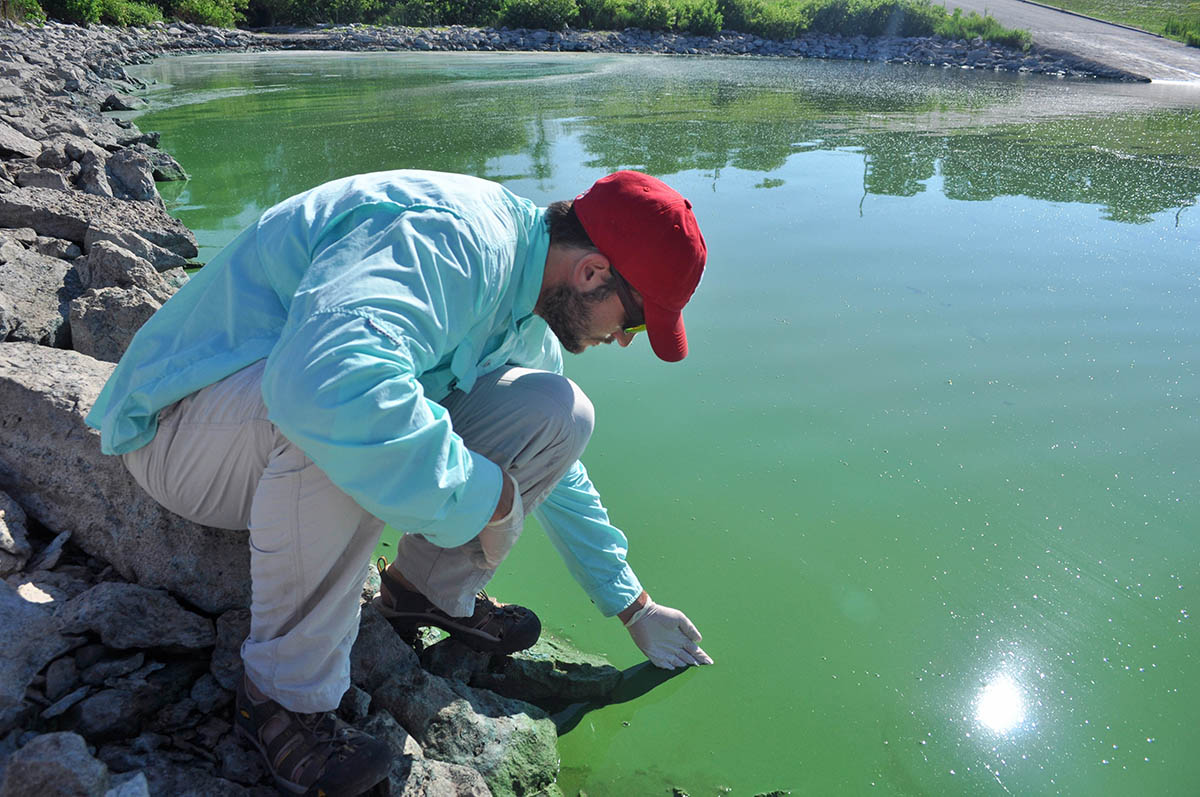 LAWRENCE — Kansas reservoirs are in trouble. From 2010 to 2017, more than 50 of the state’s reservoirs had what are known as harmful algal blooms — including a record 24 reservoirs in 2017. Harmful algal blooms, or HABs, produce potent toxins and render water bodies unsafe for any use. And in a state utterly dependent on reservoirs for water, understanding the conditions that lead to HABs, and working to prevent them, is critical.

Faculty and students at the Kansas Biological Survey, a KU research center, are seeking to do just that. 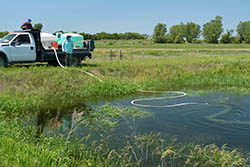 “In June, Governor Colyer declared a state of disaster for the city of Norton because of a harmful algal bloom in Sebelius Lake, and the National Guard hauled in bottled water,” said Ted Harris, a Biological Survey research assistant professor whose work focuses specifically on HABs. “Blooms happen fast, and we do not understand when or why blooms will produce toxins. We have to put resources into learning what we can do to understand and prevent them, or we’ll continue to deal with emergency situations like this, and worse.”

The HABs problem is all over the state. The Kansas Department of Health & Environment reports that since 2010, 10 of the state’s 24 federal reservoirs have had HABs, and two — Milford and Marion — have had blooms in seven of those eight years. During the 2010-2017 period, Milford was experiencing a bloom 41 percent of the time.

“If you look at those 10 reservoirs that have had blooms since 2010, you have a hard time finding a correlation in conditions,” said Jerry deNoyelles, deputy director of the Biological Survey and a KU professor of ecology & evolutionary biology. “Of the 10, one is the state’s farthest northern reservoir, one is our farthest south. Two others are nearly our farthest east and west reservoirs. The 10 also include one of our smallest reservoirs, as well as our largest, Milford. And the oldest of the 10 was built in 1950, the newest in 1981. What this tells us, obviously, is that HABs are occurring in all sorts of conditions.”

DeNoyelles explained further that infill through sedimentation — which has received much attention from the state and has been addressed through dredging — didn’t seem to be a key factor with the 10 reservoirs so prone to blooms: “None of the 10 were among the seven federal reservoirs with the most infill.”

To better understand what factors lead to a bloom, Harris, deNoyelles, Amy Burgin, and other KU faculty and students are conducting a controlled study at the KU Field Station. In 2017, samples of a bloom were taken from Marion and Milford, two of the state’s reservoirs most prone to blooms. The samples were injected into large-scale tanks and environmental ponds at the Field Station and allowed to grow under a variety of conditions.

“Last year’s work was proof-of-concept,” Harris said. “We succeeded in collecting a large volume of bloom and transporting it to the Field Station in good condition, and growth continued under varied manipulations. This summer, we’ll take a much larger sample and work with 24 large-scale tanks.”

Harris explained that the tanks would simulate varying nutrient conditions in Milford Reservoir to determine conditions that help support blooms and their toxins. The nutrient experiment will be followed by the application of a new technique designed to reduce blooms.

Partners in the study include the Kansas Water Resources Institute (U.S. Geological Survey), the Environmental Protection Agency, and faculty and students from the University of Missouri.

DeNoyelles, over a 40-year period, developed the KU Field Station’s aquatic research facility, which includes more than 100 experimental ponds and tanks as well as a model reservoir. It is one of the largest such facilities in North America and just eight miles from KU’s main campus — ideal for studying HABs and conducting other research on water quality.

Biological Survey researchers have been studying reservoir conditions around the state since the early 2000s, conducting lake-bottom contour mapping — known as bathymetric mapping — of more than 75 Kansas lakes so far, including most of the state’s big federal reservoirs.

In the process of mapping, the survey has extracted cores of sediment from lake bottoms — one of the most cost-effective ways to gain information about HABs. Each year, sediment and billions of dead algal cells settle to the bottom of Kansas reservoirs, continually decreasing the amount of water the reservoir can hold. Because each year’s sediment and algal cells settle on top of the deposits from previous years, sediment cores serve as a layered timeline of sedimentation and HAB events. Sediment core investigation allows 50 or more years of data to be collected at once.

But such monitoring doesn’t happen frequently enough for most of the state’s 200,000 ponds and reservoirs of all sizes, deNoyelles said. “We actually know far less about our surface waters than our groundwater supply. Groundwater levels are continuously monitored, but surface water capacity is monitored less than once per decade for the 24 federal reservoirs.”

Survey Director Ed Martinko emphasized the importance of water resources to the entire state. “This research is crucial,” he said. “We have to fund regular monitoring so we can get a real understanding of the issues we face with our water supply.”

The Kansas Biological Survey, a KU designated research center, was established at KU in 1911. It houses a variety of environmental research labs and remote sensing/GIS programs in Takeru Higuchi Hall and the West District greenhouse. It also manages the 3,700-acre KU Field Station, a site for study in the sciences, arts and humanities.